Next talk: Politics in an age of technology: thinking with Jean-Luc Nancy, by Prof Joanna Hodge 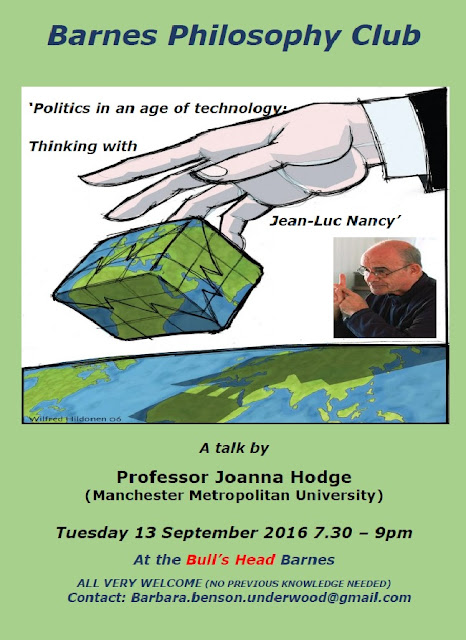 Jean-Luc Nancy is sufficiently Marxist to suppose that 'all that is solid melts into air'. This talk will look at two ways in which he has shown how classical notions of politics: sovereignty and community, are on their way out. In their place he analyses shared appearings of unprecedented formations (comparution) and a divided inheritance of meanings and identities (partage). The key notions to be explored are the retreating of the political and the supposed deconstruction of Christianity. Both are already in process- the task is to trace out their movements and ascertain their  implications.

Politics in an age of technology: reading Jean-Luc Nancy
Joanna Hodge
‘Ecotechnics damages, weakens and upsets the functioning of all sovereignties except those that in reality coincide with ecotechnical power.’ Nancy 1996/2000 p. 135-136
There are three key terms to explore here: politics, community and world, out of which Jean-Luc Nancy’s distinctive notion of eco-technics arrives for inspection, as a challenge both to Heidegger’s notion of technology, and to the more current, more widely discussed notion of bio-power. Jean-Luc Nancy is an Emeritus Professor at the University of Strasbourg, France, where he worked for many years in close collaboration with Philippe Lacoue-Labarthe (1940-2007, and see Fynsk 2007). In the nineteen seventies they wrote together two significant books, delineating a set of shared concerns, The title of the letter: reading Lacan (1973) and The Literary Absolute: The Theory of Literature in German Romanticism (1978). In that same decade Nancy published three books, on Hegel (1973) on Kant (1976) and on Descartes (1979).
Jean-Luc Nancy and Philippe Lacoue-Labarthe organized the first major conference on the writings of Jacques Derrida, under the title The Ends of Man (1980), with its challenge to the three fold implication of ends as human purposes, ends as a finality of a perfectibility, pre-inscribed in a divine or natural teleology, and those ends, as figured in the writings of amongst others Michel Foucault, which chart a major modification in the thinking of any human essence. Out of this conference arose a collective research programme, under the title Centre for philosophical research on the political (1980-1984),which explored the double senses of politics as institutionally framed practice, and accompanying techniques,  (la politique) and ‘the political’ (le politique), the distributions of meanings and forces in which order and meaning consist. It also gave rise to the notion of a withdrawal of politics (le retrait du politique) giving way to another inauguration of meaning and order.
In addition to this notion of a withdrawal of politics there are three further conceptions to introduce. Jean-Luc Nancy charts the emergence of radical politics out the epoch of competing socialist and anarchist commitments to notions of community and communism. In their place he introduces his account of an unworked, or an unworking of community (la communaute desoeuvree). This follows through an analysis of incompatibilities between the three notions of the ends of man, as previously outlined. The second notion is that of a sense, or creation of the world, which breaks with the horizons of a thinking of the world, fixed as either Kantian Ideal, or Husserlian horizon, and inaugurates a radically materialist account of meaning and identity. The third notion is that of a necessary and inevitable deconstruction of Christianity, with which Jean-Luc Nancy came into conflict with his old friend and colleague, Jacques Derrida. There are three dimensions to explore: there are the dynamics of friendship and of collective work in philosophy; there are the technical questions about the status and purpose of these innovatory terms; but lastly, and most significantly, there is the challenge to confront what is living and what is moribund in thought, with respect to a relation between philosophy and politics, in the two senses given above.