'Slavoj Zizek: the Elvis of Philosophy' a talk by Chris Bainbridge Tuesday 12 January 2016 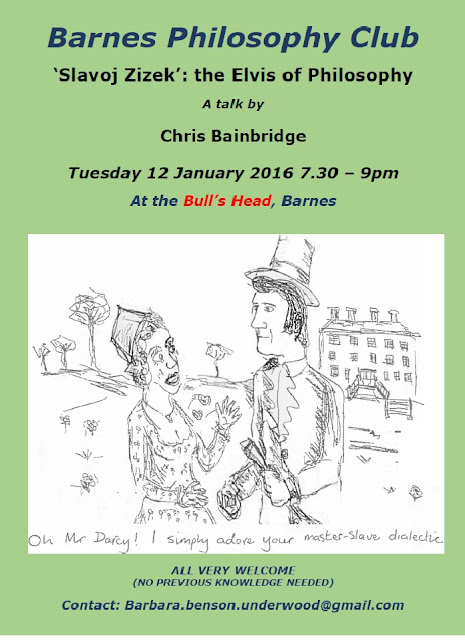 Abstract:
"The Elvis of philosophers", "the Giant of Ljubljana", and "the thinker of choice for Europe's young intellectual vanguard" are just some of the descriptions of 66-year-old Slovenian-born philosopher Slavoj Zizek. "To witness Zizek in full flight is a dizzying and at times alarming experience, part philosophical tightrope walk, part performance-art marathon, part intellectual roller-coaster ride" (Sean O'Hagan, the Observer).

Zizek has published some 60 books in his lifetime, 6 in 2014 alone. You meet the same ideas and identical chunks of text in several of his works, but it's still a Stakhanovite feat. There is even an institute of Zizek studies.

His great influences are Hegel, Marx, Christianity and the psychoanalyst Jacques Lacan. But does it all add up to a coherent philosophy? Some argue that beneath the firework displays of provocative jokes and unconventional use of language his thoughts are unoriginal and banal. Are they right? "

Posted by Chair, The Barnes Philosophy Club at 10:17 No comments: